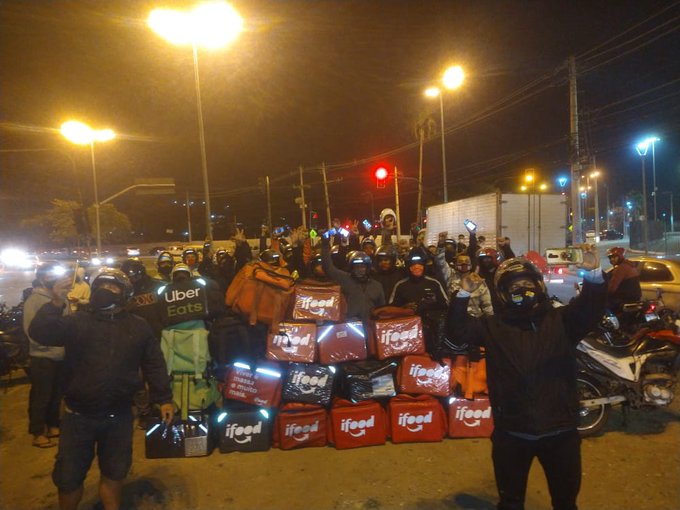 Since Sunday, July 4th, the shutdown and mobilization of iFood company application delivery workers has been spreading throughout Rio de Janeiro city. The mobilization started in Park Shopping, in Campo Grande, a huge neighborhood in the west of the city, because of two issues: one national and another local.

The nationwide issue is the demand for a confirmation code to be inserted at the time of delivery, which would protect delivery workers against customers who falsely accuse the misplacing of the order. The same demand was made in the stoppages that happened on July 4th in Goiânia (GO), Campo Grande (GO) and Curitiba (PR).

However, the work stoppage was stronger and even had a great motociata [a motorcade with just motorcycles] at the end of the afternoon in Campo Grande, due to a new local demand against the policy recently applied by iFood: the policy of the sub-regions for the logistic operators (LO). According to delivery workers from the region, this policy concentrated 80% of deliveries in the hands of couriers from the LO category linked to a specific region within a specific area in the city. This has caused delivery workers who are in the cloud category (with no established working hours or geographic region) to be excluded from the priority for deliveries and have their income extremely reduced. The priority remained only for LO delivery workers.

This unequal and unfair treatment caused an immediate reaction from the delivery workers that initially spread throughout Campo Grande region. The work stoppage continued in Park Shopping and continues up to this day, completing the fourth day of strike on Wednesday [July 7th]. “We will continue until iFood gives us an answer,” says a delivery worker who asked for anonymity and who is at the Park Shopping picket line. So far, iFood gave no statements.

Since Tuesday [July 6th], other places in Rio de Janeiro, inspired by the Park Shopping demonstration, are also starting their own work stoppage. There were stoppages also in the north region of Rio de Janeiro, in Madureira, Cascadura, Irajá, Vila da Penha and Largo do Bicão. The demand put forward by all of them is the same: the end of the LO sub-region policy. There is a tendency for the movement to expand and grow, even with the difficulties posed by the lack of clear structure and organization.

Below there is an interview with one of the participants of the Breque [work stoppage] in Campo Grande, telling how the experience of striking has been. The interview was edited to ensure the security and anonymity of the worker. 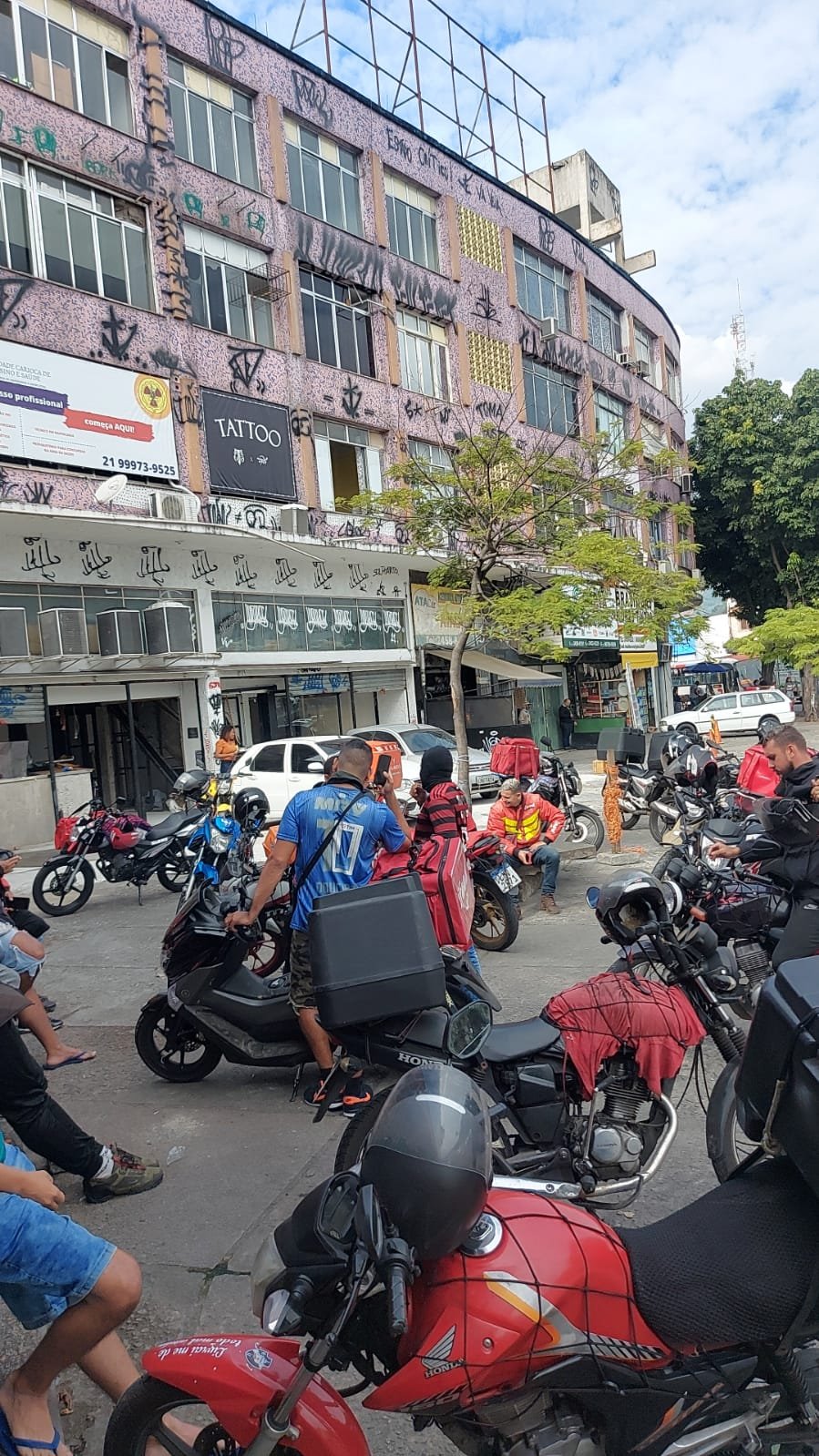 How did the movement start?

We organized it because of the start of the sub-region modality here in Campo Grande. iFood has the cloud modality, of which we are part, and the LOs (logistics operator) … these LOs have a preference for having a link with iFood, and OL delivery workers benefit from this… and we, clouds, are making fewer and fewer deliveries due to this situation, and the sub-region modality further increases this disparity…

How is the stoppage happening?

Did the couriers join it?

At first only the clouds are part of the movement, few LO delivery workers have joined the movement…

Did iFood give any answer?

So far nothing. What we are demanding is equal conditions for everyone. Everyone has the same responsibilities; everyone is subject to the same risks and dangers. We are subject to accidents, robberies, illnesses, and whatnot. Everyone runs the same risks; why does a particular group deserve any priorities?

How do you know that this system has started? Did iFood issued an official statement?

As always, nobody tells us anything. They always push things and we have to swallow. We know, because we have a certain experience, we work in several neighborhoods because we are clouds. There are places that this happened, we made a comparison and concluded that something different was happening. Our amount of deliveries was decreasing, more and more delivery workers in uniform were passing through us with deliveries, and then we stopped… and there is also the chat on the streets, right? The LO delivery workers themselves let it slip. There’s a lot of wrong things.

Clouds work in any neighborhood, we have no link with iFood and with third party companies… LOs are companies linked to iFood that offer labor. This link gives preference to the delivery workers hired by the LOs. And to make things worse, the LOs still have the sub-region modality. Sub-region is like this: each company takes care of a certain location… so, it gets pretty much preference on top of preference. 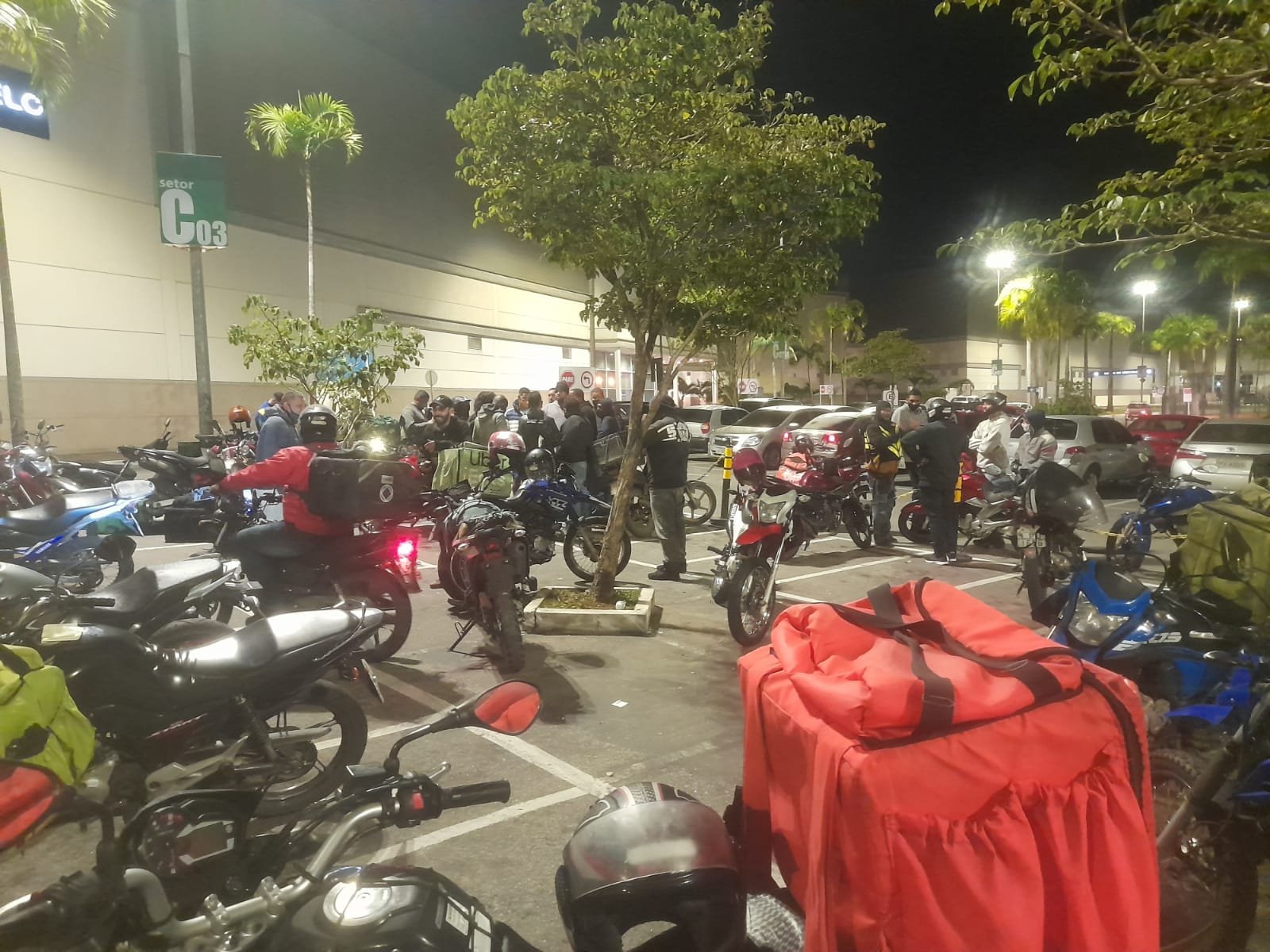 Do you have a strike fund or a Solidarity Campaign?

We have no support. If we talk about unionizing, or asking for help from the current union, few will agree. As I said before: we are very few and almost invisible. Usually, just some friends participate in the movement, and others just share the same indignation; but we are all couriers.

The images that illustrate this article were sent by the couriers in struggle and refer, in the order in which they were shown in the article, to the mobilizations taking place in Campo Grande, Madureira and Cascadura. 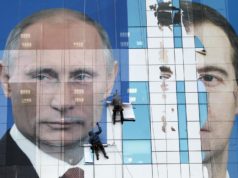 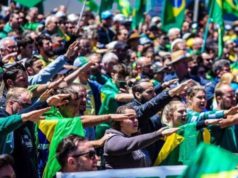 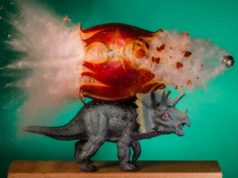